We have used a dozen images and a lot of text to illustrate this important technique but it's simple, really. The "hip snap" or "hip flick" is not much more than making sure your kayak is flat and level before you try to sit up from an off-balance position. You smoothly roll your hips as you bring your kayak back upright so that (a) your kayak goes back flat and level and (b) your body follows the kayak half a second later.

To acquire an instinctive hip snap takes practice. It's part of every good support stroke. In the low recovery it's over so quickly that it's hard to see, and you can get away without doing it. For a high recovery you need most of the full hip snap, and kayak rolling is based on a full hip snap

Let's think about a full hip snap, that takes the kayak from upside down to the right way up. See the image above. Now here's the thing: If the kayaker in the image wants to get upright again, he must use his hips to roll the kayak mostly upright first (red arrow), leaving his head and upper body underwater as long as he can. That way, the water supports all that weight. The last thing that comes out of the water is the top of his head. But his instinct is to bring his head up first. If the kayaker gets it wrong and brings his head and body up first, he's doing a dead lift of perhaps 100 pounds. That's physically possible as long as he's got a firm grip of the hand-rail around the edge of a swimming pool. He can press down on that as hard as he likes. However, it's not going to work when all he has to press down on is a paddle blade on the surface of the water. To do rolling, or efficient support strokes, you need to reduce that lift to 10 pounds. That's what the hip snap is for.

Instructions for the full hip snap

The best place to learn is a swimming pool but you can learn at the beach if you have a helper who is willing to spend time standing in waist-deep water. You can even learn at sea if another kayaker is willing to stay close while you use his/her boat as a float. See Where & How To Learn. Probably you will want to wear a diver's mask. This will help you see what you're doing, and keep water out of your nose.

We will assume that you're in a sea kayak, which means you can lean backwards during your hip snap.

[Leaning all the way back during a hip snap makes things easier, in my opinion. I don't see any reason not to do this in a sea kayak, except that you'll need to adjust your technique if you later switch to paddling a very short boat such as a river playboat or surf kayak. In a very short boat, leaning backwards will make the back end sink. And if you're learning in a kayak which has a cockpit with a high back, you can't lean back. In either situation, try leaning forwards instead of backwards, and keep your forehead as close as you can to the front of your cockpit.]

We will also assume that you have a helper standing in waist-deep water, on the left side of your kayak.

1. You are going to use your paddle, but only as a hand-rail, so give it to your helper. (S)he holds it with both hands in a firm grip, parallel to your kayak and next to it but at water level. You can't learn properly holding onto something much above water level.

2. While seated in your kayak with your sprayskirt on, brace yourself firmly in position with your knees. Grasp the middle of the paddle shaft and use it to lower yourself into the water. To get completely upside down, you will have to let go with one hand.

3. Hang upside down. While you are underwater, look around to get orientated. Count to ten. Blow a few bubbles. Maybe reach up with one hand and drum a little tune on the exposed underside of your kayak, so your helper knows you're cool, calm and collected. 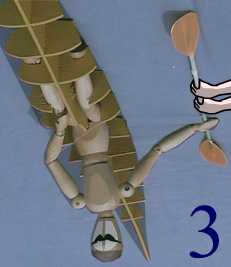 4. Then lean your body and head sideways as if you were trying to touch the paddle with your head. Try not to disturb your kayak at this stage. It should continue floating upside down. Lean sideways as far as you possibly can, so far that your ribs collide with your hip bone. If this position does not hurt, probably you are not leaning sideways far enough. Your head should be out to the side of the boat, just under the surface. Now you are almost halfway to being upright again, but the water is still supporting the full weight of your body and head. 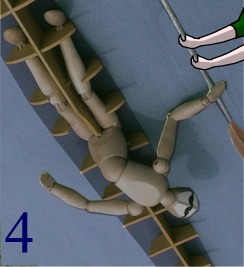 5. Leave your head exactly where it is, just under the surface. Your helper is still firmly holding the paddle on the surface. Grasp the paddle shaft with both hands, and use your hips to roll the boat until it is floating on its edge. This is why it's called a hip snap. At this stage your head and most of your body are still underwater.

6. So far, Gravity has not noticed you. Now let your body follow the boat.

If you are in a sea kayak, lean all the way back so that your back is pressed against the back of the cockpit. Lean your body and head back as far as you possibly can. Ideally, your head and upper body are lying so far back that you are practically a layer of paint on your back deck, with the back of your head touching the back deck. However the shape of your cockpit will probably prevent you lying back that far.

7. As your kayak comes upright, the last thing that comes out of the water is the top of your head. Then can you sit up. Well done!

When you do a good hip snap, your helper will hardly feel any weight on the paddle at all, certainly less than 25 pounds. If you come up head first, s(he) has to support half your body weight and it's hard work for both of you. Experiment; refine it.

a) Slow it down. Support strokes and rolling take timing; they have to be fairly quick. But when you're practicing the hip snap, there's no hurry at all. You're holding onto something solid (the edge of the swimmming pool, a paddle held by a helper, maybe the end of somebody else's kayak). There's no rush. You can really take your time. Do it as slow as molasses. Really feel it. Don't just bring yourself up to the surface using hip snap technique; lower yourself into the water the same way. Slooowly.

b) Different kayaks, different people, different technique. Doing hip snaps and rolls is easier if you have a relatively slim, low, low-volume kayak. I mainly paddle a fairly low-volume Greenland kayak which happens to have a very small "ocean" cockpit that's pretty low at the back. And it has a central pillar of buoyancy in the cockpit, like a whitewater boat. And this is what works for me: When I do the full hip snap of a kayak roll, my rear end comes right up off the seat, so I'm lying all the way backwards as in picture 6a above. The whole of my back and the back of my head are in contact with the rear deck of my kayak during the hip snap. There would be room for a thick cushion between my rear end and the seat. But the layout of my particular kayak means I'm still firmly braced - I'm not going to twist in my seat, still less fall out of the kayak. And as I come back upright, I sit up and my rear end drops back into the seat. Like I say, it works for me.

c) When you can do a reasonable hip snap on one side, try it on the other side. You need to be able to do it on both sides.

d) When you can do a pretty good hip snap, you don't really need to hold onto anything solid. Forget the hand-rail at the edge of the swimming pool; tell your helper they can go and have a coffee. You're going to hold onto a float instead. Maybe an empty 2 ½ gallon water container (which will support 20 pounds); maybe a paddle float. And when you can bring yourself upright with that, try using just an empty 1-gallon water container. And when you can do it without any kind of a float, that's called a hand roll.

Your helper probably doesn't want to be just a hand-rail.

If they know how to do a Swimmer-To-Kayaker Rescue, they'll be more interested and more useful. Don't leave it to your helper to decide when to "rescue" you; the signal for "Rescue me!" is to bang on the bottom of your kayak three times, loudly, with both hands, and then leave your hands sticking up in the air.

The commonest fault for a novice kayaker is coming up head first.

It's natural but it means that a deep support stroke or a kayak roll will probably fail. Instead of coming up all the way, you come up for long enough to get a breath and then you fall back in again. You're back where you started - upside down.

The last thing that should come out of the water is the top of your head.

2) Keep practicing, both in the swimming pool and on the sea. A hip snap is not an intuitive thing to do, and you need to practice at frequent intervals throughout your kayaking career.

On a cold day when you don't want to dunk your head, you can practice your hip snap as part of a "high recovery" support stroke.

Go to next page for:
• Support Strokes