Let's look at some strokes to turn your kayak.

We'll start with sweep strokes, because you can try them out when your kayak is stationary.

You can use a sweep stroke to turn the boat to face in a new direction while it's stationary. You can also use it while you're paddling forwards, to knock it back on course if it misbehaves. And you can use it to initiate a turn in fast water or when surfing.

It's very easy. We are going to do a forward sweep stroke on the right, and then a backwards one on the left. This combination will make your kayak rotate on the spot.

1. Sit upright and hold your paddle in the basic paddling position. Reach forwards with your right arm and place your blade in the water as far forward as you can reach, with your elbow nearly straight.

Your left hand can be just in front of your left shoulder. Pull the right blade backwards and out to the side. All the time, sit comfortably upright, keep your right arm almost straight at the elbow and keep the blade just under the surface. Rotate your upper body to the right, turning from the waist so that it is not just your arms doing the work.

2. If you keep your right arm almost straight at the elbow and your paddle blade just under the surface, then in the middle of the stroke the blade will be as far from the right side of the boat as you can reach. By that point your left hand will be in front of your right shoulder.

Keep rotating your upper body to the right so that the blade carries on towards the back of the kayak. When the blade is about a foot from the side of your kayak, lift it out of the water.

Novice kayakers quite often feel a little anxious so they lean away from the paddle. It is better to sit upright. Coaches quite often recommend edging the kayak during routine sweep strokes but that's optional. An experienced kayaker in a hurry may edge and lean hard over towards the paddle. See Edging To Spin Your Stationary Kayak.

3. Go back to your basic paddling position. Rotate your upper body to the left, turning from the waist, until the paddle is parallel to the side of the kayak. As you do so, reach backwards as if you are pointing at the back of your kayak with your left paddle blade. Look over your left shoulder. When your left arm is almost straight at the elbow, put the left blade into the water so it's vertical, just under the surface. Don't change your grip on the paddle, you're going to use the back of the blade.

4. Keeping your left arm almost straight at the elbow, rotate your body until you are facing forward again. Your left paddle blade is now as far out to the left of the kayak as you can comfortably reach. Continue the stroke until your left blade is by your left foot, then take it out of the water.

The stern rudder is a useful turning stroke for a moving kayak. It can also be used to keep your kayak going in a straight line through a narrow gap.

Instructions for a turn to the right:

1. Get your kayak moving along quite fast forwards. Stop paddling and sit a moment with your paddle in the basic paddling position.

2. Rotate your upper body to the right until your paddle is parallel to the side of the kayak.

3. Reach backwards until your right arm is almost straight at the elbow. Keep the left hand only a little higher than the foredeck.

4. Rotate your right wrist to set your right paddle blade at your preferred angle, and set that blade down onto the water.

What is the right angle? If you want to use your blade as a rudder and don't want it to give you any support at all, keep it vertical and immerse the whole blade in the water, and angle it to right or left depending which way you want to turn. If you want to use it just for support in a tricky situation, keep the blade horizontal. When you set it down flat on the surface it will act like a water ski. As long as it stays on the surface, you can put some of your weight on it. See Stern Brace.

Usually you want a bit of rudder combined with a bit of support, so you want an angle halfway between vertical and horizontal. 45 degrees. The shape of most sea kayaks means they turn more easily if they are on their sides than if they are upright. A bit of support will give you the confidence you need to lean your kayak quite hard into the turn like a motorcycle, especially if you put the supporting blade 20 inches away from the side of the kayak.

Unless you are surfing down a wave, a stern rudder stroke will slow you down and stop you. Just before you stop, try pushing the right blade away from the hull in a reverse sweep stroke. It will spin the boat sharply to the right. If you get this stroke just right, you can bring your kayak to a halt alongside a dock or a friend's kayak without any more maneuvering.

When a kayak goes sideways fast, water piles up on its leading edge. It makes a cushion of water which can even start to build up on the deck. This cushion may trip you so that you capsize.

That's why edging and leaning are useful for a sea kayaker who likes to play in waves or fast currents.

Edging to steer your moving kayak

The normal method of making slight adjustments to your course while paddling forwards is to paddle a bit harder on one side, or occasionally do a forward sweep stroke instead of a forward paddle stroke.

The following proposition has become part of the sea kayak coaching curriculum: If you edge a sea kayak slightly to one side while paddling forwards, it will turn away from the direction in which you are edging.

Hmm. Is it just us, or does this work only with a few sea kayaks? Some of them do turn away from the side you are edging but others turn towards it, and many just carry on going in a straight line.

What if you want a kayaking qualification, you can confidently achieve extreme edging, but it just doesn't make your kayak turn? Well, textbook turns on moving water generally start with a forward sweep stroke to nudge the front of the kayak to one side. This initiates the turn, which is completed by the current or another paddle stroke. If you do a subtle but firm forward sweep stroke as you start edging, it should cause your kayak to turn in the required direction a few seconds later.

Edging to spin your stationary kayak

The usual way to make a kayak spin round on the spot is to use a forward sweep stroke followed by a reverse sweep stroke. You can turn a river playboat right round with two strokes. In a sea kayak you may need ten, because the shape of the hull is designed to grip the water.

Say you are going out through waves in your sea kayak when you notice a nice-looking surf wave coming in. You want to catch it but your kayak is pointing in the wrong direction. It will turn a lot faster if it is lying on its side. To achieve this you need to lean as well as edge. This is a highly unstable position so you need to modify your sweep stroke slightly, to make it support you as well as turn you. That means keeping the leading edge of your paddle blade higher than the trailing edge, so that the blade is partly biting into the water, partly slipping over the surface like a waterski. This is a wet and aggressive stroke which will lead to a capsize if you get it slightly wrong. 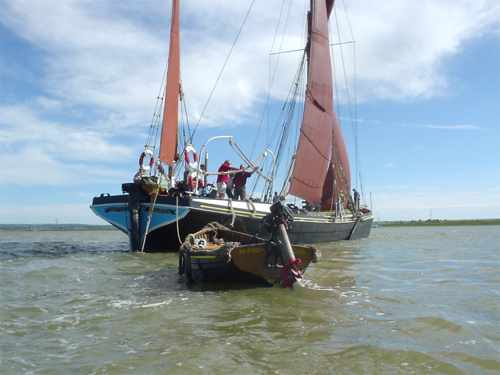 Go to next page for:
• Draw Strokes